The process of gathering data from its churches wasn’t working. The information that was coming in was at least a year old and, at that point, it was usually too late for a simple solution to address issues. The leadership at the General Council on Finance and Administration of the United Methodist Church wanted to get in front of the problems and try to identify trends that might indicate something was wrong at the churches. They also wanted to see when things were going well. If positive trends could be spotted, best practices could be shared to help.

They turned to TrendSend, an email and web based system that gathers key data on organizational performance, generates trend reports and provides a platform for sharing information. With TrendSend, the churches have been able to report on key metrics such as weekly attendance and average plate offerings. More importantly, the data was now being gathered weekly, instead of annually.

"We have 7,000+ churches reporting data, and providing accounts on what's not working in the churches, and what is working well in the churches," says Scott Brewer, assistant general secretary for connectional relations, General Council on Finance and Administration of The United Methodist Church. "The system has advanced the cause of communication, trust, and accountability."

The GCFA provides TrendSend to its conference as a service. The conference then uses the tool with its churches. In the past, the churches would provide performance data annually, but Brewer says that simply was just too late. By then, any negative trend had turned into a major problem leaving fewer methods of remediation to address the issue. "A number of conferences have been working with churches if they see trends start to go down. If they start to see a problem, they’ve been able to do some type of intervention before it becomes a full blown crisis," he says.

GCFA started using TrendSend in July 2011 and the tool has delivered in its first year. One of Brewer’s concerns was getting the churches on board using the tool on a weekly basis. "Our churches were used to providing data on a yearly basis, but now we were asking them to do it on a weekly basis," he said. "What I’m really pleased about is once people use TrendSend, they’re not protesting. It’s easy to use and understand."

In addition to being easy to use, TrendSend is providing the churches with information that’s important for them. The system provides a platform for sharing best practices that the churches are able to tap into. "We’ve always known the real challenge is to get back from the system the sorts of things that make it worth their time," Brewer says. "People are using TrendSend not just because they’re being asked to do it, but because they're getting benefits back."

The implementation of TrendSend went easily. The GCFA didn’t need to involve its IT department and the only issues came from the users wanting to do more with the tool. "TrendSend is really turnkey," Brewer says. 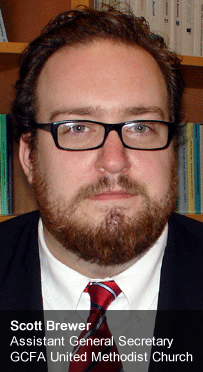 "The system has advanced the cause of communication, trust, and accountability."